Over the past 10 years, the Crystal Cabin Award has become established as a global seal of quality for innovative products and ideas in the field of aircraft cabins. 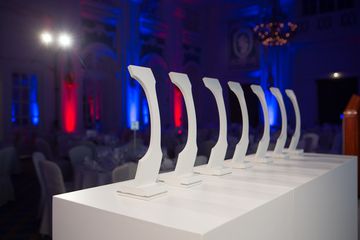 Hamburg, 30 March, 2016: For three days each April, the international aviation industry turns its gaze to Hamburg. At Aircraft Interiors Expo, the world’s biggest trade fair for aircraft cabins and on-board products, decisions are made about what creature comforts passengers can expect when they fly in the future. And for 10 years now, the Crystal Cabin Award has been an established feature of the event and a clear point of orientation for the industry. The prize, launched by the Hamburg Aviation cluster, is awarded to the most innovative new products and ideas in eight different categories. Over the years, it has gone from a niche event to become a world-renowned event, even called the "Oscar for the aviation industry" by media.

Amongst the many sponsors of the trophies, to be awarded on 5 April this year, are such respected corporations as Airbus, Emirates, Panasonic and Lufthansa Technik. The list of winners and finalists in the Crystal Cabin Award provides a good overview not just of the highlights of the Aircraft Interiors Expo, but also of general trends in global aviation. Included in that list are products that have since become successfully established in the market, such as the “Skycouch” in Air New Zealand’s Economy class, which folds out as a bed, along with such bold visions as the futuristic “LIFE” cabin from Portuguese design agency Almadesign, and practical inventions like the double armrest from Paperclip Design in Hong Kong. To mark the tenth anniversary of the award, the team are taking a look back at some of the highlights of a decade of winners on the official website, www.crystal-cabin-award.com, and on the Crystal Cabin Award Youtube channel.

The Crystal Cabin Award was launched to strengthen and reinforce the awareness of the aviation industry for cabin fittings as an increasingly important aspect of the passenger experience. It represents the idea of an independent platform for the industry to promote and honour innovation in aviation worldwide. The list of entrants to date is a veritable “Who’s Who” of the aviation industry, and the striking trophies are recognised as a seal of quality and a marketing tool within the industry. For several years now, the Crystal Cabin Award has been avidly followed well beyond the borders of the aviation industry. Just being shortlisted is enough for many companies and products to attain international visibility. The event benefits not only participating companies but also the City of Hamburg and the cluster, Hamburg Aviation, as the world’s leading competence center for aircraft cabins.

A new record was set for this year’s race to win the coveted Crystal Cabin Award trophies, with 95 entries from 18 nations. The big trends of 2016 include large-screen entertainment systems, broadband connectivity above the clouds, and lighting concepts to set the right mood in the cabin. The Crystal Cabin Award is being presented in eight categories for the first time in this jubilee year, with three finalists fighting it out in each category. The spectrum ranges from technological areas such as the “Materials & Components” category, where the world’s first approved timber floor for an aircraft cabin has reached the final three, to new business models for entire airlines in the “Visionary Concepts” category. An overview of all categories and finalists for 2016 can be found here.

The eight winners in this jubilee year will be announced during the Aircraft Interiors Expo trade fair (5 – 7 April, 2016 in Hamburg) at a gala event to be held on the evening of 5 April at the Hotel Atlantic Kempinski in Hamburg. Speakers at this year’s dinner will include Sir Tim Clark, President of Emirates Airline, and Brigitte Zypries, Germany’s Federal Parliamentary State Secretary for aerospace policy. First, though, each of the finalists has to personally face the critical questioning of the 24 expert judges. The international Judging Panel consists of representatives of various airlines, aircraft manufacturers, suppliers and technical service providers, along with university professors and expert journalists. A victory at the Crystal Cabin Award is unmistakeable regognition by the global community of specialists in the sector.

Finalists’ products and concepts are all on display in the Crystal Cabin Award Gallery at the Aircraft Interiors Expo 2016 (Cabin Space LIVE Auditorium in Hall B1, upper level). And on the second day of the trade fair (6 April, 12:30 pm), the winners will personally present their concepts to the public.

An overview of Crystal Cabin Award 2016 finalists is included with this press release and may also be found on the website, www.crystal-cabin-award.com, in the Press section. Pictures of the nominated products and concepts are also available there for download. Complete photographic and textual material on all finalists, including contact details, as download: seafile.hamburg-tourism.de/f/0d609a2c2f/

All of the finalists’ products and concepts will be presented in the Crystal Cabin Award Gallery (Hall B1, upper floor) at the world’s largest cabin trade fair, the Aircraft Interiors Expo, in Hamburg (5 – 7 April, 2016). And on the second day of the trade fair (6 April, 12:30 pm), the winners will personally present their concepts to the public.

Award-winning: 2016's Innovations for Aircraft Cabins
Crystal Cabin Award: This year’s trends in the sky
back

Over the past 10 years, the Crystal Cabin Award has become established as a global seal of quality for innovative products and ideas in the field of aircraft cabins.