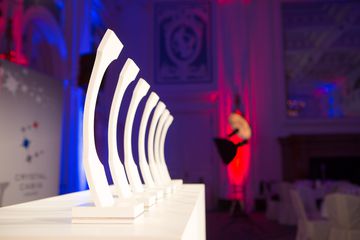 Hamburg, 2 March, 2016: These days it’s not just the aviation industry that looks to Hamburg when the Crystal Cabin Award is presented in Hamburg during the Aircraft Interiors Expo each year. The jury of international experts award the honours in eight different categories for game-changing innovations in the field of aircraft cabins and on-board products. In 2016, once again, a total of 24 finalists give a good overview of the trends and innovations that passengers and airline operators will encounter above the clouds in the years ahead – or maybe even now. Innovative lighting moods, sophisticated entertainment systems, and clever ideas for the efficient use of space are amongst this year’s highlights. In its tenth birthday year, the prize, initiated by the Hamburg Aviation cluster, has seen a record number of submissions, with 78 ideas from 18 different nations making it onto the shortlist. Eight of the 24 finalists will be taking one of the coveted trophies home on the evening of 5 April.

Some of the entries in the “Visionary Concepts” category have already attracted international attention recently. One of the finalists, Formation Design, has been turning heads with a concept that mixes First and Business Class. The key: passengers in the First Class suites are lying down above Business Class passengers. The Lifestyle concept from Zodiac Aerospace goes one step further and completely redesigns the cabin. Instead of the traditional, established class system, there are different areas – sitting, sleeping, meeting, and lounge. The third finalist in this bundle is breaking with every convention: Design studio TEAGUE has developed a fully new airline concept, Poppi. Companies can sponsor the unpopular middle seat, for example, using it to offer passengers free products and additional services. Passengers can also get to know one another before the flight in a social network.

Submissions for this year’s new “Cabin Concepts” category, aimed at airlines, are at a far more advanced stage of development. Etihad Airways, working together with Acumen Design, has made it to the final round for the second time in a row: ingenious use of space means that the Boeing 787 Dreamliner First Suite has the same creature comforts as their Airbus A380, despite a significantly smaller fuselage. Virgin Australia’s tangerine cabin is another airline concept that has made it to the final three. The designers have created a new cabin experience for the long-haul A330 and Boeing 777 fleet. Seymour Powell has also created a special cabin experience: The design agency aims to create a boutique hotel atmosphere above the clouds with First Spaces, complete with single and double rooms. The judging panel were inspired by the spacious concept, choosing the Londoners to complete the list of finalists in this category.

But the Crystal Cabin Award is not only there to inspire the wealthiest passengers. Numerous finalist innovations are also beneficial to Economy Class passengers – for example those in the “Electronic Systems” category. This includes the 2Ku technology developed by American company Gogo, guaranteeing stable broadband internet access in the sky for all passengers thanks to a double antenna on the aircraft roof. Lufthansa Systems, on the other hand, has focussed its attention on data transmission within the cabin. With the BoardConnect Portable solution, the crew can simply pick up a broadband router and carry it through the cabin. And for passengers who are more interested in outstanding entertainment than outstanding bandwidth, the Digital Sky from finalist Thales is sure to be a winner. The entire backrest of the seat in front can be used as a touchscreen, making for almost unlimited entertainment.

Entertainment on the cabin ceiling is on offer in the “Passenger Comfort Hardware” category. The German company Diehl Aerospace has been getting attention with its Dandelion concept. This allows for the complex projection of images or films in segments of the cabin, for example to create a relaxing or jetlag-reducing lighting mood. Rebel.Aero, on the other hand, made it into the final with an innovative Economy Class seat where the seat surface can be folded upwards, varying the seating position during the flight. It is ideal for taller passengers who would like to stretch their legs for a while even in Economy. The Waterfront Business Class Seat has brought TEAGUE into the final in another category. The new long-haul seat has a number of innovative elements, such as the ability to charge a smartphone by simply laying it on an inductive surface.

Clever use of induction technology is also behind Lufthansa Technik’s successful entry in another new category, “Cabin Systems”. The Hamburg company has developed an inductive hotplate allowing fresh meals to be prepared in the galley almost the same as at home. Diehl Service Modules have secured the company from Germany’s Franconia region with a second ticket to the final round, too:  The Smart Galley’s modular construction makes it possible to reconfigure the galley at lightning speed. American company B/E Aerospace scored well with its flexible LED lighting system, Viu, which can even be installed in hard-to-get-to areas of the cabin and can create an endless variety of colour moods.

Whilst innovative lighting technologies can be experienced directly, other innovations in the cabin often take place “behind the scenes”. One example is in the “Greener Cabin, Health, Safety and Environment” category, where Apparatebau Gauting reached the final round with an innovative and environmentally friendly fire extinguishing system for the cargo hold, spraying a mixture of water and nitrogen when things become serious. While passengers will never get to see Gauting’s innovation, it’s a different matter with the concept submitted by US aircraft manufacturer Boeing. The company has developed a more hygienic on-board toilet, the Fresh Lavatory, which incorporates not just cleaner surfaces but also innovative air filters. The third finalist in this category is Fraunhofer’s PYCO Institute. The German researchers have applied an environmentally friendly recycling process to composite materials used in the cabin.

New materials are also covered in the “Material & Components” category. The company F.LIST made it into the final with the first wooden floor certified for use in the aircraft cabin. This innovation is sure to bring the Austrian company to the attention of the VIP market. Much less glamourous for the passenger, but just as innovative, is the ERMS (Easy Release Modular System) concept, an innovative and significantly more efficient adjustment mechanism for backrests. Sekisui SPI also made it into the final round in this category with a thermoplastic surface design. The company’s technology, called Infused Imaging, allows for much more detailed and creative designs on cabin elements such as seat shells and partition walls.

Even before the awards ceremony in Hamburg, it is already clear the Crystal Cabin Award in the “University” category will go to Delft University of Technology this year. The Dutch university impressively stormed the awards this year, eliminating even last year’s winner, the Hamburg University of Applied Sciences, to dominate the final round. This means that students will face off against their own colleagues at the awards ceremony in Hamburg. Manon Kuehne has an innovative headrest for Economy Class, Ting Yu Chen has a multimedia on-board lounge called “FiO”, and a team of six students has a concept study for a movable galley, “Modulair”.

The eight winners of the Crystal Cabin Award 2016 will be announced during the Aircraft Interiors Expo at a gala event to be held on the evening of 5 April at the Hotel Atlantic Kempinski in Hamburg. Speakers at this year’s dinner will include Sir Tim Clark, President of Emirates Airline, and Brigitte Zypries, Germany’s Federal Parliamentary State Secretary for aerospace policy. First, all of the finalists have to personally answer the critical and probing questions of the 24 international experts on the judging panel – airline representatives, professors, aircraft manufacturer representatives, and journalists – and present their projects in an “elevator pitch”.

An overview of the finalists is included with this press release and may also be found on the website, www.crystal-cabin-award.com, in the Press section. Pictures of the nominated products and concepts are also available there for download. The complete photographic and textual material of all finalists, including contact details, is available for download here: seafile.hamburg-tourism.de/f/0d609a2c2f/

All of the finalists’ products and concepts will be presented in the Crystal Cabin Award Gallery (Hall B1, upper floor) at the world’s largest cabin trade fair, the Aircraft Interiors Expo, in Hamburg (5 – 7 April, 2016). And on the second day of the trade fair (6 April, 12.30 pm), the winners will personally present their concepts to the public. Please register here for free: