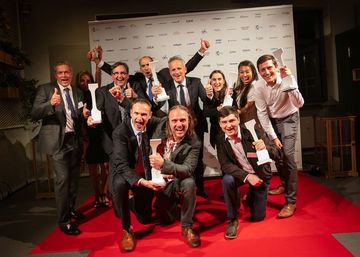 Hamburg, 14 June 2022: After three long years, the Crystal Cabin Awards were held in person again in 2022, honouring excellence and ingenuity in aircraft interiors. A wealth of innovative concepts and products were among the 24 ideas selected as the finalists in eight categories. Now a jury of industry experts has selected 8 winners during an in-depth final viewing and presentation session on the day before Aircraft Interiors Expo. The winners were announced during an exclusive awards ceremony and gala dinner in Hamburg.

A deserving winner in the Cabin Concepts Category was Elevate by Teague and NORDAM. Elevate was among the entries that attracted the most media attention in the run-up to the award ceremony on 14 June, being keenly anticipated by industry insiders and non-trade media. This visually arresting design uses floating furniture attached to wall braces to give a freer, more organic and more immersive feel than comparable premium accommodation concepts for singleaisle aircraft. The key driver behind the approach was to offer the privacy and exclusivity of the wide-body premium experience to narrow-body airliner passengers. The challenge: to give premium passengers in single-aisle cabins a genuine sense of space ownership, while offering airlines the same seat capacity. Other features of the Elevate concept include lower weight, resulting in lower fuel burn, as well as simpler components that are easier to maintain. The jury rewarded the team’s efforts with the 2022 Crystal Cabin Award for Cabin Concepts.

In the 2022 edition of the Crystal Cabin Awards, Cabin Systems was the arena for an inspiring mix of competing ideas with different approaches to adding value for passengers and airlines alike. Since the dawn of commercial aviation, safety has been the prime concern of engineers and designers. One emergency scenario with a legacy that challenges operators and design engineers alike is in-flight cabin decompression. Caeli Nova’s Cordillera system is designed to disrupt the established processes and protocols and allow airlines to open direct routes over mountain ranges by extending the time aircraft can fly at high altitude after a decompression incident from 22 to 180 minutes. This is a potential game-changer for airlines that have until now had to circumvent high terrain such as the Himalayas, Rockies or Andes. One route that would become widely available using Cordillera is airway L888, which crosses the Himalayas and is 30 minutes quicker than other routes between Europe and parts of Asia. The jury was more than impressed by anticipated annual savings for airlines of $500m and 1.2 million tonnes of CO₂, all by allowing direct routes across mountainous regions, yet without any weight or maintenance penalty.

An uncontrolled fire is a nightmare scenario for flight crews or passengers alike. The ubiquity of digital devices containing lithium ion batteries has also brought a new hazard: lithium ion battery fires. So-called Class D fires are among the most dangerous, involving burning metals combusting at extremely high temperatures and spreading very quickly. Fires involving lithium ion batteries harbour even more risk potential because damage to the battery can cause it to selfignite. During a Class D fire, the battery releases a flammable vapour, itself injecting further fuel into the fire. Another problem with these types of fire is that they cannot be extinguished and can only be contained until they die out naturally. Safran Cabin’s Fire Resistant Cargo Container wowed the jury by offering fire containment for Class D fires for up to 6 hours, the maximum distance aircraft are allowed to fly from an airport. The device gives passengers, crew and operators an additional level of protection from a threat that has the potential for catastrophic consequences during flight.

Innovations in this category seek to give all passengers a feeling of exclusivity and luxury, regardless of whether they’re sitting in first or economy. The winner this year in the Passenger Comfort category was SpaceChiller by Collins Aerospace. This personal refrigeration unit for individual passengers or larger areas of the aircraft cabin eschews traditional air-cooling technologies. Pffering customers cooled snacks and drinks within arm’s reach was long considered difficult to implement. SpaceChiller requires half the power of traditional designs. Its modular architecture offers a premium passenger experience and gives airlines added flexibility for services and crew workspace. Conceived primarily for premium seat classes, SpaceChiller can be scaled in size as required, another factor that impressed the jury. This enables airlines to provide self-service catering areas for passengers without encroaching on flight attendant workspaces or passengers’ personal space. The core technology behind SpaceChiller is a heatsink developed for DARPA. The quiet thermoelectric cooling system operates at higher efficiency and offers better performance in a small space than previously possible, without the use of environmentally unfriendly refrigerants.

Digital connectivity is fast becoming a prime concern for passengers who have become used to fast internet access wherever they travel. At the same time, more digital devices are in use on more aircraft, all competing for bandwidth. This year, the jury awarded the industry’s top prize in the IFEC & Digital Services category to Anuvu and Southwest Airlines for a new system called Dedicated Space. The system promises a five-fold increase in available personal bandwidth and a dramatic reduction in latency. Along with faster downloads and uploads, passengers are promised more stable inflight connectivity with the new system. Dedicated Space uses proprietary technology that combines aircraft hardware and intelligent software in a different approach to using satellite bandwidth onboard an aircraft. The software analyses bandwidth demand and dynamically assigns traffic based on individual aircraft requirements. Prospective airline customers Airlines don’t have to wait to adopt the new system, as it’s already certified for current aircraft.

The tactile and visual quality of materials and components play a crucial role in passengers’ subjective cabin experience. But so do the functionality and the ability of cabin components to provide the experience passengers expect in 2022. The option to charge personal devices anywhere is taken for granted on the ground; on-wing, the situation has often been more challenging. The winner in this hotly contested category was Thales Avionics with Pulse, a charging solution for aircraft cabins that uses patented power management technology to dynamically allocate power during the flight. This slim, low-weight power supply unit lets passengers recharge their device in flight via USB-A, USB-C or wireless connection, taking away charge anxiety and letting travellers enjoy their device at any point during their journey.

Sustainability is a central issue of almost any discussion about aviation in 2022. But the depth of innovation towards a more sustainable future goes far beyond propulsion technologies such as liquid hydrogen or Sustainable Aviation Fuel. It came as no surprise that the Sustainable Cabin category was a hotbed of activity in the 2022 edition of the Crystal Cabin Awards, with many creative submissions that reduce aviation’s ecological footprint. The top honour in this category was claimed by Swedish manufacturer Diab in cooperation with AkzoNobel, Rescoll and Roctool. The group has pioneered a thermoplastics manufacturing process to produce 100% recyclable panels for cabin interiors. Among the aspects that particularly impressed the jury were overall reduction in life cycle cost and lower environmental impact by facilitating recycling of cabin elements. The process developed by Diab and its partners is not only more eco-friendly but also faster than methods using adhesive films. The thermoplastic sheets are welded directly to the foam core which also offers improved acoustic insulation for the finished material. 3D-shaped and decorated panels can be produced in a one-step process, resulting in components that are lighter and cheaper to produce.

The University category is a playing field for imaginative concepts with a clean-sheet approach to a range of issues and situations. The 2022 winner in this fascinating category is Ken Kirtland from the Georgia Institute of Technology. His idea for new type of airline featuring electric aircraft convinced the jury with its unique approach to sustainable air travel. The focus of the concept is to use underused regional airports in a fascinating departure from traditional hub-and-spoke concepts for air networks. Portal envisages a new type of zero-emission electric-powered aircraft to ferry passengers between local hubs; the plane would have a range of 1000 miles and accommodate 30+ passengers. The layout of the Portal cabin was another aspect that drew the jury’s admiration. The cabin features all-premium seating with panoramic window views. Seating is arranged around the cabin to speed up access and provide incredible views through the large windows. The system would also capitalise on a slower airspeed by offering a more immersive, relaxing travel experience, while flying at low altitude. This concept provides an enticing vision for the future of regional flight.

The winners will present their winning concepts on 15 June at Hamburg Messe in the Cabin Space LIVE Auditorium, Hall 4 Lower at 1.15pm. The Crystal Cabin Award Gallery, with an overview of all the finalists, will be displayed at the Hamburg Pavilion, jointly presented by Hamburg Aviation and Hanse Aerospace in Hall B6, Stand 6B90.

Images and graphics for all eight winners entries are available for download here: https://seafile.hamburg-tourism.de/f/3140510fea464badad6a/

The Crystal Cabin Award is supported by:

Join the sponsors and supporters of the Crystal Cabin Award! Information about sponsoring opportunities and packages is available from Lukas Kaestner: lukas.kaestner@hamburgaviation.com.

About the Crystal Cabin Award The Crystal Cabin Award is THE international prize for innovation in the aircraft cabin. A high-calibre jury made up of renowned academics, engineers, specialist journalists and airline and aircraft manufacturer representatives comes together under the slogan “Let your ideas take off” to honour extraordinary cabin concepts and products. The competition was launched by Hamburg Aviation and is organised by the Crystal Cabin Award Association. This unique honour has been presented at the Aircraft Interiors Expo in Hamburg every year since 2007. The trophies have become a seal of quality, known and coveted around the world.